By PJ Wade via Realty Times 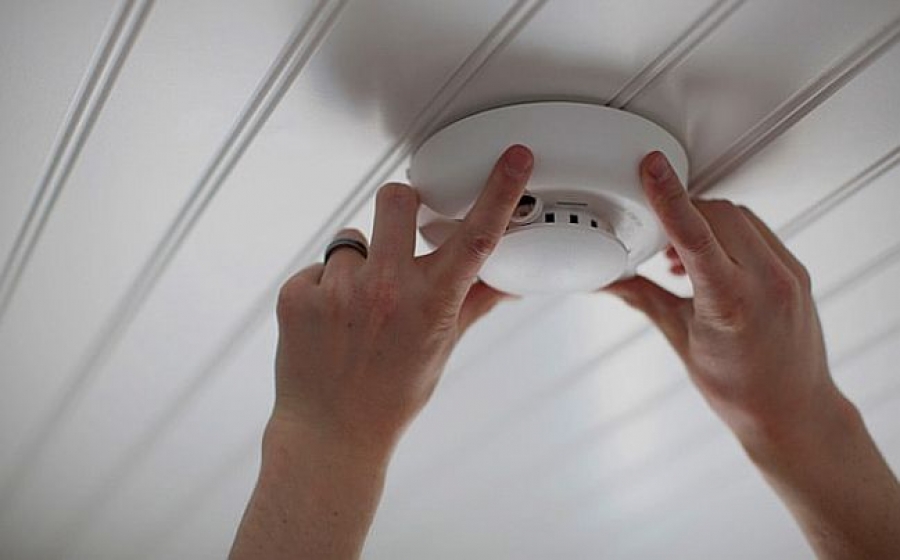 Have movies and super heroes lulled us into a false sense of security when it comes to house fires?

On screen, the good guys survive fires with ease and have time for dramatic rescues among the flames. In reality, between 2500 and 3000 Americans die in house fires every year — a tremendous drop from the roughly 8000 who used to die annually, but this lower statistical plateau still represents too many unnecessary deaths.

"We continue to have fire problems for a number of reasons; first of all, the way we build our homes and the things we put in our homes are different today," said Lorraine Carli, vice president of Outreach and Advocacy for the National Fire Protection Association (nfpa.org).

"Because we have been so successful in reducing the number of fires, people often do not think they are going to be impacted by a fire. The level of complacency in the community means they may not be as careful as they should be. [Unattended] cooking is the leading cause of fires. Heating, electrical, smoking... what people do in their homes causes fires."

Fire deaths are also the result of what people don’t do.

The majority of deaths occur during fires where there were no smoke alarms or no working smoke alarms.

How many minutes will you have to safely escape your home once a smoke alarm starts screaming?

While action movies and their Teflon super heroes may mislead us, the devastating California wildfires bring the real fire message home: fire travels very quickly — usually too quickly for anyone but highly-trained professional fire fighters to safely react to it.

"Modern [largely-synthetic] home furnishings, along with the fact that newer homes tend to be built with more open spaces and unprotected lightweight construction, all contribute to an increased rate at which home fires burn," said Carli. "These factors make home escape planning and practice critical."

Evacuation — in the form of a tried and tested Fire Escape Plan for Evacuation of My Home — is the smartest reaction to fire for non-professionals like us. Have you and each family member practiced, in daylight and darkness, two ways to exit — within two minutes — each room on each floor in your home?

Less than half of Americans (48 percent) know that an effective home fire escape plan includes working smoke alarms, two ways out of each room, and an outside meeting place a safe distance from the house.

What's the big deal? You've walked out the front and back doors countless times.

"You'd think that, but it's a very different scenario when [your home] is dark, it's filled with smoke, one of your main exits may be filled with smoke or fire, there are things blocking your escape route... it becomes a very dangerous scenario if there is an actual fire." said Carli. "Practice, so that if the smoke alarm sounds, everyone knows exactly what to do and how to use that [2 minutes] wisely."

Well-placed and fully-functional smoke alarms provide precious life-saving minutes when smoke reaches an alarm. Scrimping on the number of alarms, skipping monthly alarm tests, or failing to replace batteries is dangerous and irresponsible.

Open concept living spaces allow fires to spread more quickly. Alarm placement is crucial to keep exits open. Think about where people sleep and how they'll exit your home to accurately calculate numbers and locations of alarms. Fully-functional fire alarms should be installed in every bedroom and outside each sleeping room as well as on every level including the basement. Read manufacturer's instructions for placement details. Interconnecting the alarms increases effectiveness.

Local fire fighters may also be a resource.

Last Christmas Eve, a family of four died in a home fire. Their newly-renovated vacation home was known to have fully-functioning smoke alarms, but this was not enough to save the two children or the parents. The cause of the fire remains unknown although it started in the livingroom.

The two-storey cathedral ceiling in the livingroom did not cause the fire, but it is believed to be the culprit in accumulating life-threatening toxic smoke. As is all too common with vaulted ceilings, the peaks are too high to easily position and maintain smoke alarms. In this case, smoke from the livingroom fire accumulated in the cathedral ceiling before triggering smoke alarms in time to warn to the family.

"Fire does not discriminate from one individual to the next," said Operations Manager Scott Evenden, who led the investigation of the above-mentioned fire inspection for The Office of the Fire Marshall and Emergency Management.

"Smoke will rise to the [cathedral] ceiling — it's like an upside down pool. Smoke will fill that void from the ceiling down... there were multiple smoke alarms in that home. Tragically though, they were placed in positions that did not incorporate a smoke alarm into the highest point in the cathedral ceiling.Therefore, it is our opinion that may have may have had an effect on the ability for the smoke to be detected in the home and the inability of the occupants to escape safely from the home. We'll never know 100%…"

What do you know about home fire sprinklers that you are positive is true?

"The unfortunate reality is a number of jurisdictions have removed the provision for home fire sprinklers in their adoption process for their building code," said Carli.

"The model code is the minimum level of safety and a jurisdiction that decides to take that [sprinkler] requirement out is in fact allowing substandard homes to be built in that community."

NFPA's Fire Sprinkler Initiative is an excellent resource if you're building a new home or considering a significant renovation. Is your state a member of one of the 30 state coalitions intent on spreading knowledge and fire safety awareness regarding home fire sprinklers?

The majority of fire deaths happen at home. Because home is also where you feel safest, are you overlooking fire safety issues that may be staring you in the face?

Have a safe, happy Holiday Season.

All the Joy of the Season to you and your family!

* THIS REPORT IS AN OPINION THAT MAY BE INACCURATE AND IS PROVIDED SOLELY AS AN INFORMATIONAL TOOL NOT DESIGNED TO PROVIDE DEFINITIVE ANSWERS. ALL ELEMENTS ARE OFFERED “AS IS” AND BLUEBOOK EXPRESSLY DISCLAIM ANY AND ALL WARRANTIES, REPRESENTATIONS, AND GUARANTEES OF ANY NATURE, EXPRESS, IMPLIED OR OTHERWISE, INCLUDING BUT NOT LIMITED TO ANY IMPLIED WARRANTIES OF MERCHANTABLITILY, NONINFRINGEMENT, TITLE, QUIET ENJOYMENT, ACCURACY, OR FITNESS FOR A PARTICULAR PURPOSE. IN NO EVENT SHALL BLUEBOOK (OR THEIR SUPPLIERS) BE LIABLE FOR ANY GENERAL, DIRECT, SPECIAL, INCIDENTAL, INDIRECT OR CONSEQUENTIAL DAMAGES OF ANY KIND, OR ANY DAMAGES WHATSOEVER (INCLUDING WITHOUT LIMITATION, THOSE RESULTING FROM USE OF THE PRODUCT, INCLUDING : (1) RELIANCE ON THE MATERIALS PRESENTED, (2) COSTS OF REPLACEMENT GOODS, (3) LOSS OF USE, DATA OR PROFITS, (4) DELAYS OR BUSINESS INTERRUPTIONS, (5) AND ANY THEORY OF LIABILITY, ARISING OUT OF OR IN CONNECTION WITH THE USE OR PERFORMANCE OF INFORMATION) WHETHER OR NOT BLUEBOOK HAS BEEN ADVISED OF THE POSSIBILITY OF SUCH DAMAGES.

Know what you should pay for your home improvement projects with bluehammer.Claim your home. It's free!

9 Ways to Eliminate Congestion In The Kitchen

Rubbing elbows with chefs isn't always a boon. Consider circulation pathways for a kitchen that lets everyone work in comfort

7 Model Home Ideas To Steal For Your Home

You don't have to be in the market for a new home to tour model homes. In fact, model home complexes are a great place to get a few ideas for your existing home. Whether you're looking for ideas to renovate your kitchen and want to see the most current trends, are having a hard time deciding on paint colors and want to see how others are incorporating color into the home, or are simply looking for a little inspiration, you can find it here.

How To Create A Great Accent Wall

Bringing color into your space doesn't require you to splash paint up everywhere. Sometimes, focusing on just one wall can have even greater impact, or at least allow you to slowly get used to the idea of color before you take the four-wall plunge.

Nontraditional Places to Use Pendant Lights

When you picture pendant lights, where do you see them in a house? Close your eyes and imagine it.

10 Ways To Transform Your Trashy Old Furniture Into Standout Pieces

We know. That antique sideboard or set of chairs you got after your grandma died is sentimental, but also completely clashy with every other piece of furniture you own, not to mention out of touch with your general sense of style.

Question: I am having trouble figuring out what constitutes an improvement and what is ordinary maintenance. Thinking ahead to selling my house in a few years when the market rebounds, I have been keeping accurate records so that I can deduct these costs to lower the capital gains. Recently, I remodeled a bathroom, replaced a deck, replaced and upgraded the spa filter and motor, replaced the front door with a fiberglass model guaranteed to last more than my lifetime, and replaced a roof and rain gutters. Which of these can I safely regard as improvements, and which are just maintenance?

A Guide to Home Insulation Materials

Insulation is one of those building products that you never see, because it is usually covered up by something else. But if you don't have enough, or if it is installed incorrectly, you're wasting energy and paying more for heating and cooling than is necessary.

Find The Right Interior Doors For Your Home

Take a minute to count the number of doors in your house. Surprising, right? Consider then, the impact that a little attention to the doors can have on the overall style and design of your home. Whether you're just moving in or staging for a sale, new doors are a simple way to dramatically update the space. The good news is that there are as many styles of doors as there are doors in your home. Making the decision is the toughest part.

Finding adequate storage is a particularly challenging problem in bathrooms, and not just because they are usually the smallest rooms in the house. Bathrooms have increasingly become the place to store a large and diverse number of items, including bath towels, beauty supplies, toiletries, hair care products, medications, soaps, shampoo, and assorted cleansers. And if the primary inhabitants of the bathroom happen to be teenagers, then the demand for storage space increases exponentially.

Chimney Liners: Does Your Home Have One - Do You Even Need One?

You rely on your chimney being safe. Whether you use your fireplace for wood-burning fires, you have a furnace that vents through your chimney, you utilize a wood stove or gas insert, your chimney needs to be able to handle heat and sparks without allowing damage to your home. Stone or brick chimneys can be made safer with a flue lining that helps to move heat and gases up and out of your home.